10 CAR SCHEME
HOME    MEMBERSHIP  AIMS AND OBJECTIVES  ASPIRATIONS LINKS
For a number of years there have been plans to introduce 10 car trains on many Windsor Lines services out of Waterloo. The aim is to ease congestion in the peak hours. This requires more than just extending trains by inserting 2 extra carriages. The platforms have to be extended, in some cases this has meant moving signals. For stations where, due to physical restrictions, the platforms cannot be extended it is planned to introduce selective door opening to all SWT electric multiple units with plug type sliding doors. This will allow the guard to unlock doors only for the carriages that are in the platform. Extra storage sidings are being added to accommodate the new trains.

WLPA Suggestions
The WLPA are in full support of this scheme, in fact we have argued for this for many years. When Barnes Bridge Station was being rebuilt the WLPA suggested to Railtrack/Network Rail that footings should be placed in the embankments to allow for future extensions. They chose not to do this and now it is costing substantially more to do this than if it had been planned for at the stage of rebuilding Barnes Bridge platforms.

Waterloo International
The huge disused former Eurostar terminus at Waterloo has been an embarrassment to everyone since services were moved to St Pancras some years ago. Platform 20 has been adapted for use by domestic trains (SWT) but so far, after £millions have been spent, it has only been used as a diversion platform, the first occasion was on October 23rd 2013, when a Hounslow Loop service terminated there. Hopefully it will come back into use as part of the 10 car scheme. The other platforms face an uncertain future, with no Transport Secretary in post long enough to decide on their future.

New Trains
The 10 car scheme will not provide a boost to British (or German and Japanese) train manufacturers, 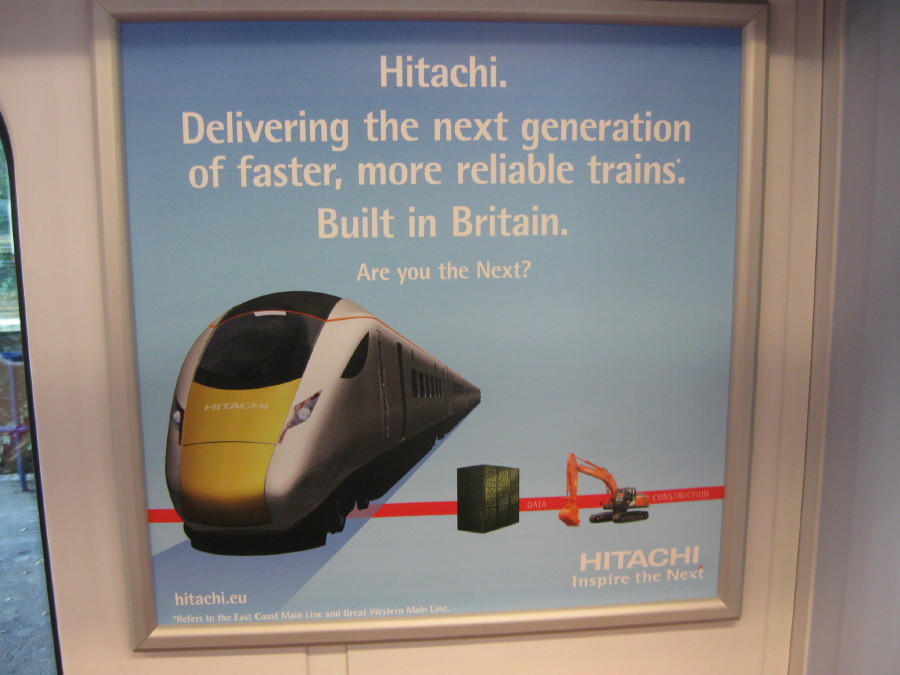 as existing trains are literally being recycled, re-used and rebuilt. This has not stopped Hitachi making claims in an advert on various British and German made trains operated by SWT.  The answer to the advert's question is NO!


The new trains will be a mix of existing
4 car units (class 458)  and former 8 car Gatwick Express units (class 460) rebuilt as 5 cars units with new cab ends, similar to the Desiro units. These will be painted in the SWT suburban  livery and known as class 458/5. This has already started with the first 460 units being converted now.
The first 458/5 units should be in service in Summer 2013.  A total of 36 units are planned.

Later, between March and December 2014, 20 2 car class 456 units will be transferred from "Southern" to SWT. These 1980s built units are a 2 car version of the class 455 and were originally intended for lightly used suburban services, including the Waterloo to Weybridge via Hounslow service. All were diverted before delivery to operate services from Victoria/London Bridge instead. So in a way it is welcome home to these units! They will also be repainted in SWT red and the interiors rebuilt to match the existing class 455 units. They have a different cab design with no through corridor. As a result their use is restricted, as they could not be used on any 10 car trains into platforms 1-4 at Waterloo, which are not being extended.  The class 456 units are currently (December 2013) coming out of Southern service and being put in storage, pending SWT use.

SERVICES
The first 10 car trains should have been in use from May 2013, starting with the Waterloo-Windsor line. They will then appear on the Hounslow Loop and Weybridge line services. In December 2013 it is planned they will be used on the peak hour only Waterloo-Shepperton via Richmond services and a couple of main line peak hour services. The 456 units will be phased in from March 2014 on the Ascot to Guildford services, which will become standard class only. They will also be used with 455 units to form either 10 car trains on certain mainline services or 8 cars (class455 and 2x456) to release class 455 units to form additional trains. As of December 2013 the first 10 car units were being tested, pending passenger use.

Stations where platforms will not be extended are:
Waterloo platforms 1-4, Addlestone, Chertsey, Datchet, Egham,

Feltham, Hounslow, Isleworth, Sunnymeads, Syon Lane, Wraysbury.  Mostly this is because of level crossing or bridge restrictions. At Waterloo and Hounslow it is because the track layouts with points etc. preclude platform extensions.
The extensions are generally of a sectional steel design, akin to a glorified Mecanno set.

Make the most of the first class on the Ascot to Guildford via Aldershot services as it will disappear under the 10 car scheme.

When we get 10-car (two 5-car 458/5 units) SDO will occur at stations with short platforms. It will also apply to the 450 Desiro units. It will always be the front cars that permit entrance and egress at short platforms. Depending on the length of the platform a number of the rear carriages will be “left out in the cold”. The huge difference from now will be that any number of carriages can have their doors opened whereas now it is by 4-car unit. When a 458/5 train enters a short platform station a sensor alerts each car until the train stops so that its doors will open. When a 450 train enters a short platform the sensor interacts with the whole train and the train calculates how many cars can have their doors opened. In both cases the guard can activate the doors from anywhere on the train. The sensors are yellow bars fixed onto sleepers between the running rails.

This will be as follows in pairs.

The first six 5-car units will be assembled from 460 Gatwick Express stock (see below) and they were to be available as follows, but currently (September 2013)only one set has been delivered and is being tested:

The rest, made from existing 458 stock plus one extra car each from the 460 stock, will be available as follows:

The diagram below (courtesy of The South Western Railway) shows how the “new” 458/5s will be made up from the six 8-car Gatwick Express 460 stock and the existing thirty 4-car 458s.

The numbers in square boxes show how many of each original type go into the new set ups and the dotted lines show where. Each new 5-car unit will have three motors. There is enough power for three to be sufficient for five carriages even though now there are three per four carriages. Notice that, at the bottom, four cars (ex-Gatwick luggage cars) will be kept as spares (donor vehicles).